The total avalanche of repair demand has ceased, but repairs still come in. They're jamming up with the demands for ski services. I may be in grease one minute, and Norway the next. 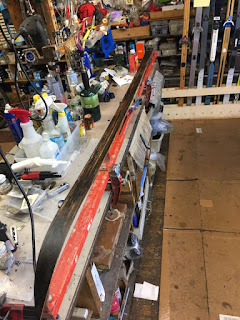 Not just a ski service but a really traditional ski service: this pair of wooden skis needed the bases coated with pine tar. The really good pine tar is hard to get. You can find stuff intended for horses' hooves, but it doesn't act the same way under the torch, and it definitely doesn't smell as nice. The smell of pine tar is like the sound of bagpipes: people are either attracted or repelled. At our Jackson shop, which was located in the base lodge, lots of skiers would walk into the cloud and express their opinions freely. Everything was a public performance in a theme park. The guests felt very entitled to critique the performance, as if every action was staged for their entertainment. 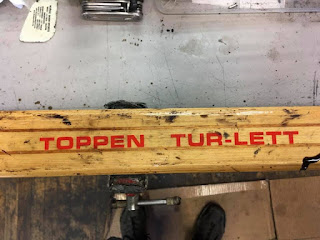 The model name of the skis was an added benefit. I can say I have actually cleaned Tur-Letts for a living.

The repair queue never ceases to present comparisons of old and new. A local enthusiast brought in a ProFlex I would date to about 1994. 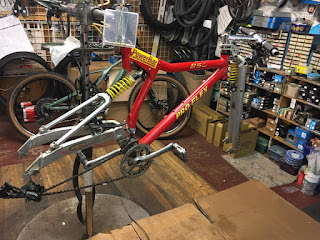 In the background you can see a 2021 specimen. 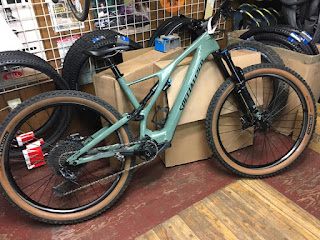 The owner of the ProFlex wanted it totally done up, modernized enough to improve its function, but only to make it better at what it was in the beginning: the first stages of full suspension for the masses. ProFlex tried to make serviceable and affordable full suspension. Their vision was aided by how little we knew about suspension and the determination of riders to destroy things. But this one already had important early conversions to improve strength. The coil springs were much stronger than the original design with elastomers on a center rod. The elastomer rear suspension tended to fold up if a kid rode a long wheelie. Ask me how I know that. 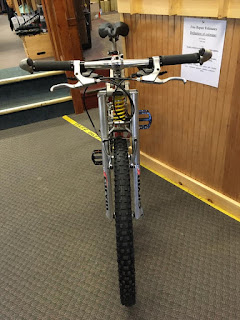 Routing the cable for the rear linear pull brake was actually a little tricky, since the bike was designed for center-pull cantilevers. On the fork it was simple enough, but the rear cable was routed through the seat tube. That made a very awkward bend to connect to the side-pull linear pull brake, if I went through the designed pathway. Leading the cable around the outside, it could easily get snagged on the crank arm unless secured to the frame. I hate depending on zip ties, but linear pull brakes are superior to cantilevers for mountain bikes, and I don't like to mix brake types by having linear pull on one end and center-pull canti on the other. Brake action should be symmetrical.

Mixed in with the full-suspension timeline was this Specialized exhibiting many of the modern characteristics of carbon frames, but with the last of the 135mm rear hub spacing, 26-inch wheels, and a fixed-length seatpost. Like finding a stone ax with a carbon fiber handle. 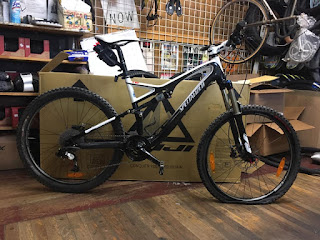 Speaking of seatposts, dropper and suspension posts mostly have a threaded collar securing the fixed and movable portions of the post. I almost invariably find these collars loose, often very loose. The continuing march of smokeless mopeds included this clunky monstrosity still waiting for parts a couple of months later: 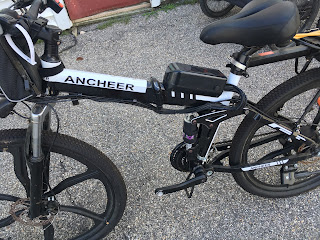 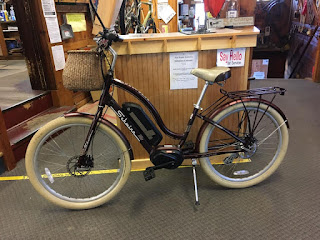 Even if the wheels turn out to have mysteriously exploding spokes, because the bike is a mid-drive, the wheels are just conventional disc-brake wheels, easily replaced or rebuilt. A solid conservative entry in the marketplace.

Many of the bikes that come in for service are covered with greasy crud. We've tried all sorts of cleaning products and methods to work around our lack of a real parts washer and dedicated bike-only workshop space. When I saw a product called Speed Degreaser on the QBP website, I picked up a can to test it out. 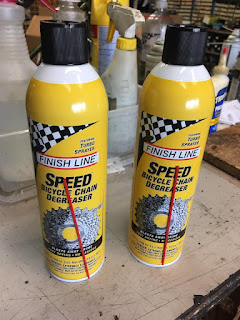 It really does blast away many forms of chain crud and accumulated greasy dirt, although I did find its limits in some of the baked-on grime that has come along during my test period. And it's about like huffing ether. So, as a nuclear option it has a place, but regular use probably indicates a growing chemical dependency.

Accessory companies are always offering smaller and lighter minimalist tool kits for a rider to bring along and not really be able to fix anything because they have no leverage. Here is my entry in the nanotool category, the absolute smallest 5mm hex key you can get: 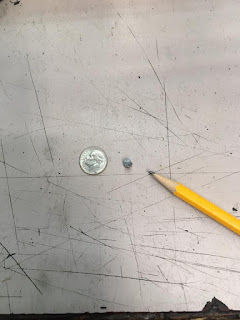 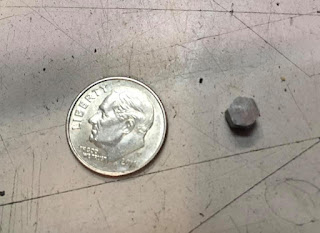 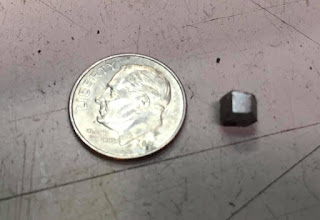 That's actually the stub of a 5mm hex key that I was cutting down to use in a very restricted space on the ProFlex restomod. Back when we sold ProFlex, Ralph and I made low-clearance 5mm wrenches, but I couldn't find any of them, so I had to make a new one. It provided a nice visual for a cartoon I was going to do anyway, about nanotools.

With so many customers forced to shop online to find bikes for themselves and their offspring, we're picking up a lot of service work on the products that actually get through to them. One little BMX bike made me aware of a trend that had developed in headset design, particularly in that category of bike.

For decades, forks had threads on the outside. The fork was held into the frame with a headset that fastened with a top cone and locknut that threaded down the outside of the fork, essentially fastening the fork into the frame like a big bolt. 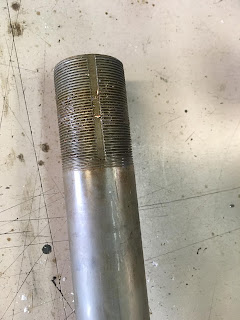 In the 1990s, faced with a huge wave of abusive riders and inexperienced mechanics, the industry came up with a headset that required a fork with no threads. 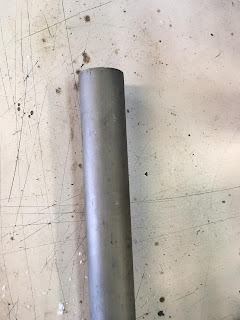 This rapidly became the norm, spawning its own set of complications and drawbacks. Be that as it may, at least you knew what to expect. But now a category of headset that looks like the threadless type has developed threads on the inside of the steerer tube. To adjust this correctly, you need a threaded top cap that goes directly into the fork, rather than being secured with a bolt that goes down through it into some sort of anchored nut pressed into the inside of the steerer tube. The bike shown here had defectively-machined threads, so the top cap can't go in far enough to secure the mechanism. There is no tap available to tidy up the threads. The way products are made and distributed these days, the company can't even send the guy a fork. There is an alternative fastening system that they are sending, that goes in from the bottom of the fork, because the typical threadless anchor system is not designed to fasten securely inside an internally-threaded steerer.

We get a lot of garden cart wheels in need of tires. On this one, the wheels were rusted onto the axle, so the customer dropped the whole axle and brought it in. 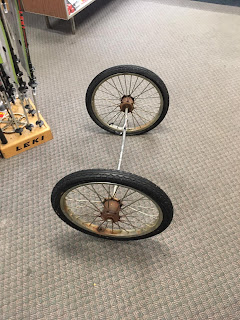 Two wheels is two wheels. I clamped the axle in the work stand and changed the tires with it hanging there.

I rag on the weird mutant stuff we see these days, but every so often something comes in from the Pleistocene Era of mountain bikes to remind me of the mutants I didn't have to deal with too much, because I was out of the bike business during the mid and late 1980s while a lot of crazy things seemed like good ideas to product designers. 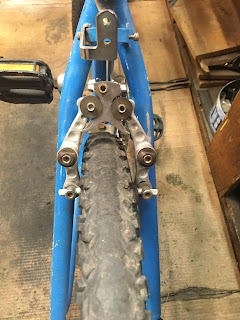 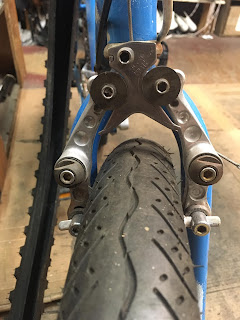 I spent my last couple of days off getting my car worked on. I had the good fortune 32 years ago to find the best mechanic anywhere. He wasn't very near where I lived at the time, and then I moved further away, but he has never been wrong and has never wasted my money. Poor people have to consider quality over convenience. But it's a bigger undertaking to come off of my wretchedly degenerated riding schedule since the end of regular commuting, and crack off back-to-back 40-mile days over hilly terrain. Fortunately, the weather was nice, but 40 felt like the new 100 for me, especially the second day. 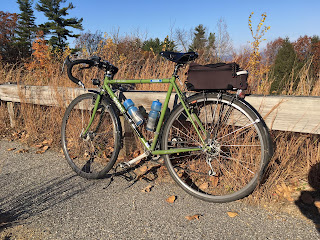 The new Brooks seat with the cutout is great for drying small laundry at rest stops: 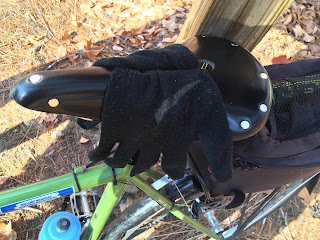 My liner gloves had gotten sweaty by the time I stopped for snacks and water. I'd left home in the morning chill, and now the day was getting up around 60F (15.5C to the rest of the world).

To make the last of the route I resorted to the old Superman juice: cognac and coffee. Back when bike racing was an art, not a science, a guy who was racing at a much higher level told us about that concoction as the secret potion for long races. I'd used it for events over 100 miles. Combined with a strategic dose of ibuprofen, it got me through this grind in good shape. 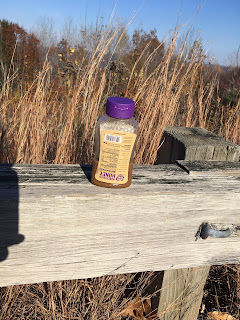 The proportions are critical. Too heavy on the coffee and you just get an acid stomach and jagged energy with nothing behind it. Too much cognac and you don't care if you get there or not. Done right it is truly remarkable. I could feel it kick in and wear off. You only get a couple of rounds out of it at most before your body calls bullshit and declares that it is really, truly fried.

I say every winter that I will be more dedicated to maintaining fitness like I used to. Hey, it could happen.

It's tough getting old: 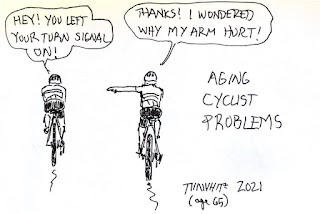 Unknown said...
This comment has been removed by a blog administrator.
7:57 AM

I was doing a google search and your site came up for homes for sale in Altamonte Springs, FL but anyway, I have enjoyed reading it, keep it up!
Read more:Gerberian Shepsky
Shepsky

How much coffee to how much cognac? Inquiring minds want to know.

3 or 4 parts coffee to one part cognac. I never really measured it, so I'm still guessing. You will be able to taste the cognac, but it should not dominate the flavor.