As someone with a conflicted relationship with motor vehicles, I have tried to spend as little as possible to buy one. But I need one because of the distances I have to cover in challenging conditions, so they can't just be thrashed pieces of junk.

For the past several cars, I've picked up ones that various members of my family were discarding as they contributed to the used car market by buying new ones. It was an agreeable parade of small Ford station wagons, which mostly succumbed to the long months sitting in the dirt driveway while I'm using the bike for transportation, and the inexorable rust that consumes all New England vehicles that face the tide of brine flooding our roads every winter. The price tended to be pretty affordable, which suited my underlying reluctance to chip in much of anything to the moto-centric culture and polluting, speeding, jostling, sprawling environmental disaster that is transportation in America.

The latest -- and last -- of this line sits in the driveway now. It's far more car than I would ever buy, but the gas mileage is as good as the last Ford Focus that finally rotted out underneath the bodywork. Behold The Shuttlecraft: 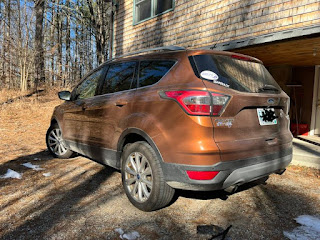 "Nice car," a friend and colleague said as we headed out after the last zoning board meeting.

"Thanks. I had to kill my father to get it," I said. Dad was a Ford man. He died at the end of May. My mother is 93, and has decided to quit driving because, as she says, "I'm 93 years old. If anything happens, it will be my fault even if it isn't my fault." My sister is on hand to drive the two of them around. So this car, this space craft full of electronics and automated features, was available for ...really cheap... just as my mechanic was telling me that he couldn't sticker my old car anymore because the frame was almost gone.

There's a lot to get used to.  The speedo and tach are analog, but all other data comes at the driver through two screens. One is a small one centered above the steering wheel. The other is the now ubiquitous touch screen in the middle of the dash.

In the cellist's Honda CR-V, she can punch up a readout that tells her about fuel consumption: miles remaining at current rate, and miles per gallon. She has to ask for it. In The Shuttlecraft, that display is constant. I suppose I could turn it off, but I find it fascinating.

Miles per gallon tells you about the energy required to accelerate a mass against the force of gravity and the other factors that inhibit forward motion. As a cyclist, you have an intuitive -- and very tactile -- awareness of the toll that hills and headwinds demand. Through the readout in The Shuttlecraft, I can see the dramatic difference between uphill and down, and any acceleration. Going down a hill, the mpg readout will max out at 99.9. Woo hoo! Going up a hill it drops to lows like 11, 9, 7, or sometimes 3. It just drains. And any short hops or stop and go driving drops the total from a creditable 30-31 down into the "sorta might be okay" upper 20s. The Focus was surprisingly no better, especially with snow tires, but the Shuttlecraft is undeniably more of a bourgeois armored personnel carrier. It's really hard to find a nice small station wagon these days but I still wish Dad had had a bit more varied taste in cars. A nice Passat wagon logging 40 mpg, perhaps.

Well, po' folks can't be choosers. In an alternate timeline, I stayed in a more built-up area and never bought a car at all. But then I'd have to live in a more built up area. Nature called.

Around here, I've fallen in with the tree huggers to try to defend a natural environment where there still is one. When I moved here, it was the country. Now, 35 years later, it's more like heavily wooded suburbia. That makes our efforts all the more important, because the economy depends increasingly on subdividing large parcels of land and increasing population density. More roads aren't being built, but the ones we have are getting a lot busier all year. Residential development is piecemeal for the most part, a house here and a house there, but larger tracts are proposed as the state grapples with a lack of "workforce housing." Workforce housing is a nice way of saying shacks for the scantily paid grunts who perform the essential but disregarded tasks of actually making civilization and the economy run. If it had existed in Annapolis in the 1980s, I might never have moved away. But Annapolis was obliterated by explosive, poorly planned development. I saw it coming and ran for the hills, literally.

Ironically, the tree huggers do a lot of driving. It's the norm. In rural areas, the distances demand it. In winter country, however degraded the winter might be, the weather favors a heated, enclosed vehicle, too. Some of the environmental folk have electric or hybrid vehicles, but most of us drive used, internal combustion vehicles. Their designs reflect the American norm. Mine is hardly the largest. You can only be so much of the change you want to see before you are so far beyond the leading edge of societal evolution that you're just a freak out there, with no infrastructure and no momentum of social change behind you. So for now, the environmentalists drive to work and drive to public hearings and educational presentations and off to their environmentally appreciative recreational activities.

When I get out of the car every spring, I immediately have less time for other things. Commuting takes at least twice as long. It provides beneficial exercise, but cycling is not complete exercise. A bike rider needs to do weight bearing, stretching, and resistance exercise to preserve bone density and avoid muscle imbalance. And the route takes me longer and leaves me more tired than it did when I was in my 30s and 40s, or even early 50s. Freedom isn't free. It's an investment decision no matter what type of freedom you choose.