This morning's fog and low clouds made the hour seem earlier than it was. I was reluctant to charge out before sunrise because of the bad visibility. And anyone who has ever seen the locals drive a country road knows that fast, innacurate driving is not just an urban problem.

Even though we moved our opening time to a more genteel late hour until business picks up at the northern outpost, I missed even that. But I got the ride.

Here at the shop, not a single customer has interrupted my quiet vigil. But two golf carts just whizzed by on the course that should be frozen solid and beginning to support our snowpack for the coming season. I should bring the 'cross bike to ride laps on the cart paths. With the building on its little knoll, I could set up a few challenges to make short outings interesting. Every few minutes I can duck in and see if anyone is waiting. The cordless phone might work quite a distance out from its base.

The gray light reflecting off the road this morning made it look dry, so I took the road bike instead of the fixed gear. It wasn't too bad, especially since I was in a hurry, but the tires stayed black and shiny for the whole ride, while wet grit accumulated on my backside. Now the sun is sort of out and the temperature is around 60. It's not natural.

No one can say for sure if this warmth is a bad sign for ski season. I've seen conditions turn from this to blizzards in previous years. I've also seen it just continue like this, pummelling the economy mercilessly. Sad to say, that is the more common scenario. But absolutely nothing is guaranteed. Is the snow cloud half full or half empty?

I'd rather ski in ski season, but I'll do whatever conditions require. Off-season cycling has a nice lunatic feel to it. Even when I dabbled in racing I got more out of challenging training conditions than from most of the races I entered. Those stolen rides in winter were a sweet taste of spring, a hint of the promise that faith would be rewarded. In a place where winter was more likely just a raw, wet interruption of the riding season there was no point in getting hooked on snow sports. As the north acts more and more like the south, I fall back on southern methods.

Economically, it's tough. Many more people will play on the snow than will defy gray, wet chill just to give the weather gods the finger and keep riding. I am doubtless more fond of the finger than is good for me, but the attitude keeps me going, mile after mile. There's glory in victory, but there can be deep satisfaction in persistence. Wax up the skis or pump up the tires, I'll see you out there.
Posted by cafiend at 12:38 PM No comments: Links to this post

The best November days are gray and still. A dome of stratus spreads sourceless light over the stark sticks of the leafless forest. No silence is more profound than on a windless November day.

I flowed along beside the Ossipee River. A flight of hooded mergansers burst out from below the river bank and cracked the swirled mirror of dark water as they dashed to gain air speed. White wing patches flashed with rapid beats as the formation took off, wheeled and headed upstream.

Further on I crested a rise into a cloud of scent that reminded me why I came here. I came for the chill air, the scent of wood smoke and sight of weathered houses, one of them mine. I came for the mountains rising up, inviting exploration.

It's easy to forget these simple things when civilized life makes its own constant demands. The wilderness here is reconstructed, reclaimed by the forest as family after family gave up the fruitless task of trying to eke sustenance out of smaller and smaller subdivisions of the original stony farm.

Lacking the character and full range of practical skills to cut loose and have a subsistence farm of my own, I try instead to live a lightly civilized life. Nibble and sip instead of gobble and guzzle. Just that much would have gone a long way to slow down the crises afflicting us. Oh well. It's not too late, but grows later.

I ride in the gray stillness and wait.
Posted by cafiend at 9:24 PM No comments: Links to this post

You Go to Ride with the Weather You Have

When stacking mileage like firewood, to see how big a pile you can get before the weather really shuts you down, you go out in all sorts of stuff you would pass up in a milder season.

Speaking of mild, this fall has been ominously warm. If things don't turn more seasonable, there will probably be a couple or three nordic ski retailers hanging from the rafters in their empty shops.

I take my mind off it by snatching rides between or during rain showers in the ever shorter periods of dusk that pass for daytime from now until mid-January. Besides, you never know what could happen. For instance, the winters of 1990-'91 and '91-'92 went from bad to worse, two of the worst I can recall. Sure we got a bit of snow, but only a bit. We endured many gray days of rain and mud. Then December 1992 looked like it would usher in more of the same.

Early in January 1993, someone flipped the winter switch. We got pounded with snow well into March. The next winter, 1993-'94, took up where that left off. Buildings collapsed. Snow piled up to the windowsills.

It all turned to crap again in '95. But we've had our years, and could have another one at any time. Or not.

Today's special was a fixed gear ride in the drizzle with temperatures in the 50s. Niiiice. I had the day off, so at least I could wait for the rain to let up around mid-day. Tommorow it's back to dawn patrols. The forecast calls for low clouds, but little falling from them. Good enough.
Posted by cafiend at 7:37 PM No comments: Links to this post

Riding in the Margins

Now that I can't commute regularly by bike to work, either because of too many scheduled events or the long drive to my winter location, I have to fit the rides into the early morning.

Dawn patrols feel virtuous. Even though I miss the sleep I lose to them, I feel a different energy, fueled by the satisfaction of having ridden at all. It keeps me going through the day and into the evening, helped no doubt by the quart or more of coffee I will suck down in the course of a normal day. I'm such a pawn to my two addictions, fitness and caffeine. It could be worse. I could be addicted to cheap sex and hard drugs, or drunk driving or just plain aggressive driving.

It's early in driving season. By February I will be completely fed up and I'll still have the long month of March to endure before I can return to bike commuting for another blissful six months. But all that lies ahead. The problem is that every year puts more young drivers on the road and a solid 30 percent or more are assholes.

Karmically speaking I can't bitch. I was just such a punk. I followed too closely. I thought I passed other cars carefully, but only as carefully as a punk driver who loved corners and curves and would do almost anything to put clear road in front of me going into them. In fact, the best four minutes of the hour drive to Jackson are the tight curves along a set of ponds on Route 153. The rest of it has become a chore. The route could be worse, but it's still an hour of my life I won't get back. I have not figured out how to combine the drive with some other necessary activity I can do from the driver's seat. Of course there are outrageous options for non-essential activities I could do while driving, but the need for them is decidedly limited. But yes, I did think of them.

I'd rather be biking.
Posted by cafiend at 8:28 PM 3 comments: Links to this post

Night and Day in Wilkinson Swamp 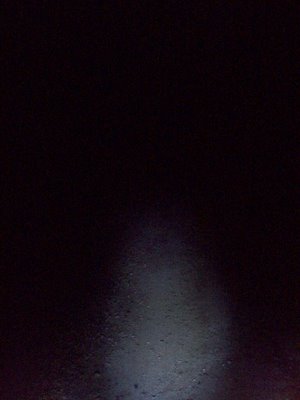 On a short ride to test my lights, here is where I turned back on Wilkinson Swamp Road, because I just didn't feel like going further, alone, into the darkness. 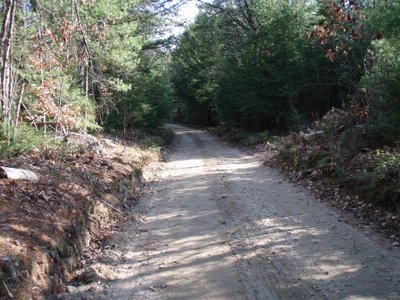 Here's the same spot, in daylight. I know the road, close-held between dark conifers, frequented by moose, deer and bear, as well as smaller mammals and, if we are to believe the increasingly strong rumors, perhaps even a resurgent population of mountian lions. It's all easier to believe in the dark. 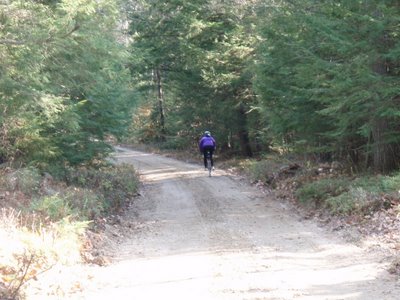 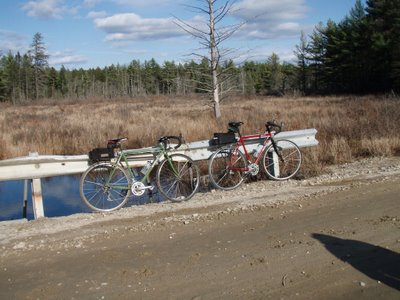 Here is a portion of the wetland. Wilkinson Swamp fills several hundred acres around the long horsehoe-shaped course of Wilkinson Brook, from its headwaters on the southern slope of Effingham's own mountain range, down and around to Pine River. The biologist who recently traversed it as part of the ongoing natural reources inventory described its heart as "primeval." He guessed that few, if any, other people had crossed it except when it was frozen and buried in snow. It's nice to know such places still exist, especially closer than the Canadian or Alaskan tundra.

Posted by cafiend at 3:33 PM No comments: Links to this post 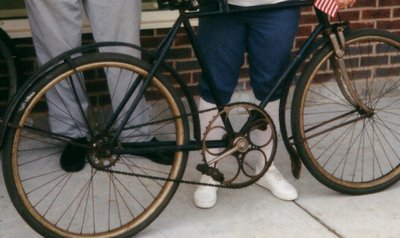 Check out that chainring! It looks like a massive gear until you examine the rear cog. Then the gearing looks downright reasonable. This bike was waiting for the Madison, CT Fourth of July parade a few years ago. It may have been one of the many that Jim Spillane pulled out of his barn, but I don't think all the vintage bikes we saw that day came from there. It's amazing what people have tucked away in sheds, barns and basements.

Posted by cafiend at 3:19 PM No comments: Links to this post