Shot from the Saddle 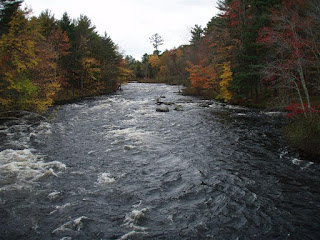 This picture falls under the heading "why I live here." Rural life presents many inconveniences, but they are the reason the area remains relatively undeveloped.  This picture shows the Ossipee River from the bridge at Effingham Falls. I stopped to take it on Tuesday morning when I went out to try to get a shot for Rantwick's foliage contest. 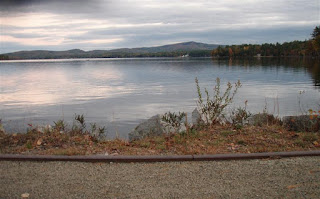 On Friday I stopped on my way out the rail trail to look out over Lake Wentworth. The Olympus camera I carry is such a great light collector that it makes the dusk look more like a cloudy afternoon. Some ducks were impersonating loons out on the lake, swimming and diving in the big bird's signature style, but then quacking to each other after they surfaced as if enjoying the joke. They were too far out to be sure. Maybe they were multilingual loons instead. 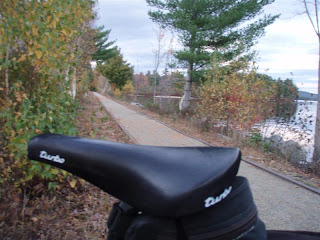 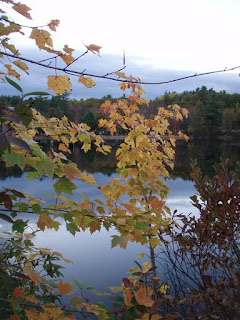 This little twig off the other side of the path was putting out its best colors.

I resumed the ride out toward the far end of the path as dusk deepened. The dynamo light continues to do a great job. The hub dynamo is much better than the tire-driven model. The tire-driven model did a fantastic job when everything was fresh and new, but it was extremely sensitive to alignment. I have not found a new application for it yet.

I tried to shoot a video of the headlight in operation once the night got really dark. Unfortunately the low resolution of the camera made it grainy and unimpressive.

October brings a feeling of solitude. Summer's crowds are long gone. I rode several miles out the path without seeing anyone. When I reached my car where Cotton Valley Road turns to dirt and the pavement takes a hard left to go up Cotton Mountain the area was deserted. I thought it might be a good opportunity to strip right down and put on dry underwear and jeans. No one was around. Only the  mysterious creatures that make weird screeching noises showed any sign of life. I was alone. Who would be out in the chilly night when most people were home having supper?

Of course this triggered an instant rush hour. I had to laugh. Fortunately I was not caught putting on a headlight strip tease. Unbelievable how many people suddenly needed to pass through that one obscure rural crossroads at just that moment.

Soon I was alone again at least long enough to finish the change and drive away.
Posted by cafiend at 7:01 AM 2 comments: Links to this post

Monday was nice. The cellist mentioned that we hadn't taken a spin through South Effingham in a while.  I forgot to shoot any pictures on our way out. Most of the ones I grabbed on the way back either came out fuzzy from camera motion or the color was muted because the sun was so strong. It's hard to capture the full sensory experience of a nice day's ride in a few quick photos. And if you're taking the time to produce really good photos, you're not having that great uninterrupted ride. 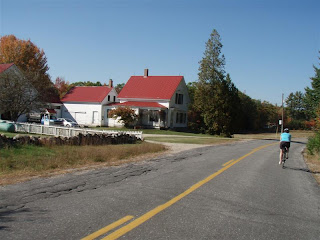 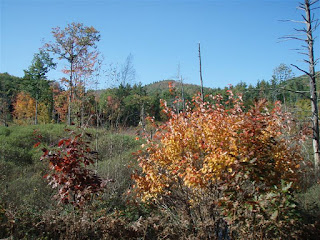 The tornado swath from 2008 is growing in. The damaged area was logged to salvage the timber, evening up the edges of the scar in some places. 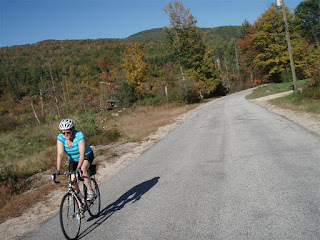 This is actually a climb. Here it is, October, and we're riding in shorts and a jersey. 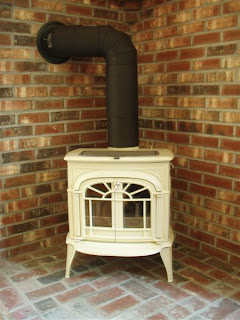 We got another couple of nice days before the rain moved in. Rain, fog, darkness and rural highways all put together definitely kill my enthusiasm for bike commuting. They make nice visual effects with the fall colors, though. And they really make you appreciate a snug house and a new woodstove in the living room.
Posted by cafiend at 7:01 PM 2 comments: Links to this post

Email ThisBlogThis!Share to TwitterShare to FacebookShare to Pinterest
Labels: Touring

The car is an intoxicant. It makes some people aggressive. It makes others stupid. Use becomes a habit, then a dependency. May cause drowsiness. Side effects include weight gain, shortness of breath, tunnel vision and in some cases injury or death.

Try to quit. See how hard it is.

As with many strong substances, it has its uses as well as its risks. Some people seem to manage its effects better than others. Its power is insidious. It must always be used with caution. Excessive use always leads to increased risk of dependency.

Posted by cafiend at 9:50 PM 4 comments: Links to this post